I’ve been wanting to make a custom knife for Tim C for a while now, but either haven’t had the time, or we couldn’t figure out exactly what knife to make. As you probably know, Tim has a severe fetish (or possible committable disorder) for SAKs with magnifying glasses so we knew that would be included somehow. He has done a great job amassing just about every model out made, but they are all 91mm. So to change that, he decided that his favorite 84mm knife, the alumnus, with the added magnifying glass and Phillips from a 91mm would be the target to shoot for.

The donors for this project include :

-a new sportsman for the blade, corkscrew, scales, and file (Fun to chop up Paul!)
-a vintage golfer for the scissors layer
-a swisschamp fr the magnifier/Phillips layer and,
-a bantam for the backspring to use for the mag glass/Phillips layer

-an additional explorer went into the mix to get an additional Phillips since I decided to sacrifice the first one as an offering to my belt sander…….


So I started out by taking all the knives apart and laying everything out.
Here’s everything you need to make the 84mm sciphi alumnus (aka 84mm explorer with file)

I was short one contoured liner so one had to be made from a full liner by tracing the shape and sanding down to shape.

The opener layer was easy because everything was right from the sportsman.

The next layer was the Phillips and mag glass. Since the magnifier is plastic and there is not much you can do to change it, it was left alone. The Phillips on the other hand must get worked over pretty well. It is too long for the 84mm frame if you want the magnifier next to it.

There is almost exactly ¼” difference between where the pivot hole is, and where it needs to be. So a new hole needs to be drilled that is around .085in instead of the existing 0.97in hole made for the bigger pins of the 91mm knives.

A best guess is made where the hole should be and a punch is used to make a small dent to help keep the drill bit in the right place.

If you have ever tried to drill hardened stainless steel, you will know that it no worky!!!!! The drill bits just skate on it and will not do it. So you can buy a $30 carbide drill bit which may or may not make it through, or draw some of the hardness out of the tang and make it drillable which is what I chose to do. To do this, you just hit it with a torch until it starts to turn red, but without overheating the tip as to not lose the hardness in the flutes that get twisted when used.

The Phillips bit is pretty stout and the only part of it that really needs to be fully hardened is the tip. To avoid heating the tip, I froze a little ice cube around it just in case. It melts quickly, but it only takes about 10 seconds to heat the tang so it doesn’t have to last long.

Once the hardness is reduced, a regular drill bit was used to drill a .086in hole where I thought it needed to go.

This is kind of an eyeballing job as it is difficult to know exactly where to drill. All 3 sides of the Phillips tang have to be ground down to fit so the Phillips will sit correctly closed, open, and at 90 degrees at the half stop.

I adjust for the open position first and get the cutout right for the backspring so the Phillips sits correctly open. So the overlapping area needs to be ground off.

After SLOWLY grinding and fitting a couple times, the phillips sits correctly against the backspring in the open position.

Then I adjust the kick angle so when the Phillips is closed, it lines up right with the magnifying glass and can be opened easily.

This is a very tedious adjustment. I ended up overgrinding a little and screwed the first one up as you can see here.

So that one goes in the circular file and a new one gets cannibalized from an explorer that was just sitting on the bench minding its own business. I've drilled 3 phillips bits so far on my drillbit and am wondering when it's going to give up and break and I find out 7/8 of the way through the 4th one! That's the drillbit tip sitting there on the phillips unfortunately.

After redoing the open and closed positions, the tang is shortened so opening and closing feels right. The edges are slightly rounded to make the action feel smooth.

The Phillips is now kind of ugly looking since a rough belt was used to grind it and it has been discolored by heating with the torch.

The edges are cleaned up with a finer belt, and then the tool gets polished on the buffer with 600 and 1200 grit compound to make it look right.

That finishes the Phillips layer off and the liner that was ground down earlier is used to separate it from the scissors layer. The tools line up just like they do on the 91mm luckily.

The rest of the knife is easy because nothing has to be modified so on goes the scissors and blade layer.

Tim wanted no key ring, so I reshaped the keyring spacer smooth.

Now the rivets get peened on. Because an 84mm backspring has to be used for the mag glass layer, it is 0.012in thinner than the tools which lends a little play into the middle of the knife so it takes a while to dial in the action, but everything works pretty well once its done.

The scales from the sportsman were reinstalled and the knife is done. The sportsman had the hole for the pin too, so the knife is just a pen short of having plus scales. The 91mm is in there for scale. 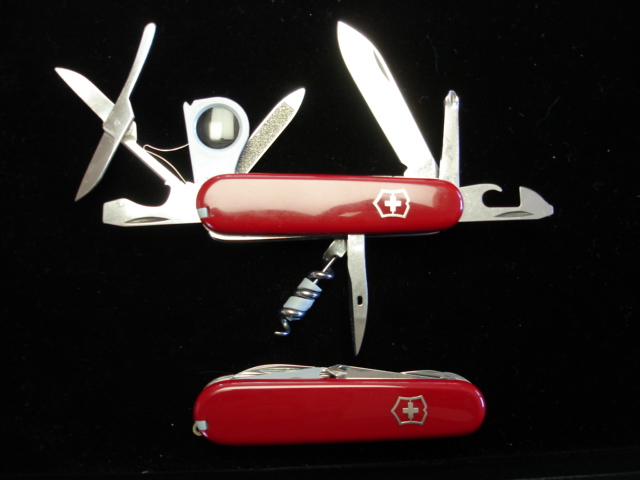 I wish Vic made this model. My favorite models are the explorer, woodsman and Yeoman in 91mm, and this knife has everything I would want to carry except the saw which I would want more for camping anyway.

Hope ya like it Tim. I will never make another one so it will be unique to your collection.

An 84mm Yeoman with saw is next as that is my ideal carry knife.

Anyone out there who has a golfer or two they want to trade or sell, let me know!!!!