If you are one of the lucky few who has a complete SOSAK Knife collection, you know what I am talking about.  Each one on it’s own is quite special, but as a whole it really does become more the sum of it’s parts, and with a new one to add every year, it becomes that much more interesting!

For those who aren’t familiar with the annual SOSAK knives, each year respected SOSAK member and head of SOSAKGear Travis Autry comes up with a list of possible knives for members to choose from, and members vote for the one they like best.  Once the votes are tallied, a winner is chosen and it becomes the SOSAK Knife of the Year.  The current Wenger EVOGrip 16 is the 2007 Knife Of The Year.

There have been four previous SOSAK Knife of The Year Knives, each with it’s own charm.  It all started with what was supposed to be a one shot deal, and as with many things here is SOSAK, it turned out better than we ever expected and grew into an annual offering.

The previous SOSAK Knives are:

2003 Black Huntsman- The first SOSAK knife was just a simple one off in the beginning, but turned out to be anything but simple!  Originally supposed to be printed on red scales, we ended up getting black ones due to an error at the factory.  The Black Huntsman as it became known (later the SOSAK Black Huntsman) was marked with the SOSAK logo and “The Secret Order Of Swiss Army Knives” and was very sharp indeed.  This was also the only year in which there was no year stamp, as at this point it wasn’t expected to be a regular occurrence.  The logo was on the “front” side of the Huntsman, while the Victorinox shield was placed on the “back” side with the corkscrew.

2004 Sapphire Deluxe Tinker- Technically I suppose the Deluxe Tinker that came along in 2004 could be considered the first annual knife since it was the first one to feature a date and was truly the beginning of the Knife of the Year legacy.  Featuring translucent blue scales (what the catalogue called Sapphire) and the SOSAK Logo, the Secret Order’s name was left out to allow for the year.  This was also the only year where the SOSAK logo was placed on the “back” side of the knife next to the phillips screwdriver.  This was also marked as being the first year in which members got to vote on color as well as model.

2005 Cobalt Hiker- A little smaller than the 2004 Deluxe Tinker model, but even better received was the Cobalt Hiker.  Much like the previous year’s Deluxe Tinker, the 2005 edition featured just the logo and the year, but this time it was on the “front” side of the scale, more in line with the original Huntsman model.  Once again the model and color were chosen by members, and a solid blue (known in the catalogue as “Cobalt”) was the most popular.  While the first two SOSAK Annual Knives were popular, they simply didn’t prepare us for the success of the Cobalt Hiker, and sales of this model were a significant increase over the previous two models.  While sales of each annual knife top the previous year’s sales, none have been by such a wide margin as the 2005 Cobalt Hiker over the 2004 Deluxe Tinker. 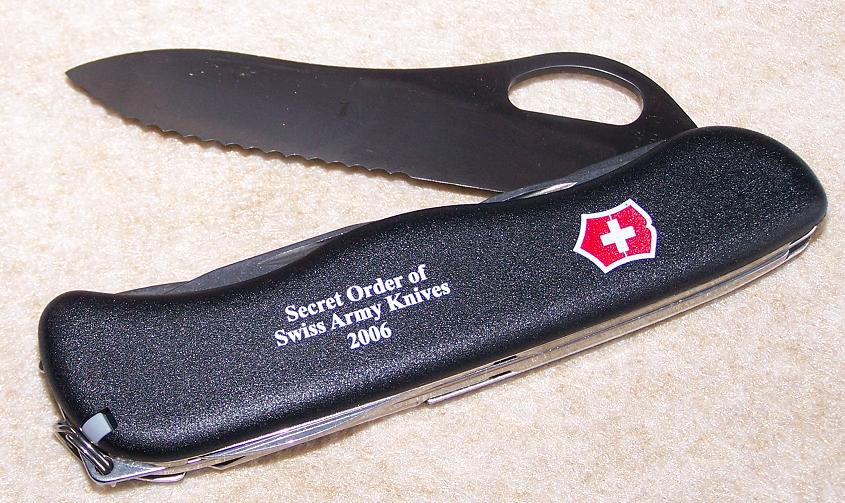 2006 Black Bladed OHT- This was a very different model, and a fairly radical departure for us.  The previous years were all 91mm models, and this was the first time we did a 111mm model.  This was also the first time since the original knife that color wasn’t an option- or rather it was, if members voted for one of the other knives that were listed.  If you voted for the OHT, you forfeited your color preference, as they were only available in the same color range as the old Ford Model T!  In addition, the ‘06 OHT was the only SOSAK Knife of the Year to not come with a tin collector box, and instead was shipped in the standard cardboard box that any other knife would be shipped in.  This year again the markings were on the “front” side of the knife but the logo was absent, replaced by “Secret Order of Swiss Army Knives 2006" and the standard Victorinox shield.  One more difference was waiting for us when the knives arrived- the main blades were black coated!  This was not an option, and we were unaware of the black coating until the knives arrived from Swiss Army Brands.

Overall the SOSAK Knife of the Year program has been a great success, and I am personally looking forward to this years addition.  The 2007 Knife of the Year will have the benefit of being the only knife to date produced by Wenger with a Victorinox shield, which is of course part of the SOSAK logo.  This is definitely going to be a landmark year for collectors in and out of SOSAK, and I don’t envy Travis trying to top this again next year- but then I say that every year and he always manages to succeed!