“A SAK is useless if you have a toolbox”, “You will use it just to peal oranges”, etc... Every owner and enthusiast of SAK’s had listened this phrases one time or another. My own sister and mother said it to me more times than I care to count. I agree with a thing: You never need a SAK… Until you real need it and don’t have it. And it just take one day full of incidents to change this view of my family.

Ím the proud owner of a Swiss Champ and a carry it to absolutely everywhere. Sometimes my sister mock me, calling me the “Pen Knife Guy”, but I dońt care. I know that someday it would save the day, as in the end it saved.
At this particular day, I was taking coffebreak with my mother. Sudenly, the screw of her glasses get lose and a lens just fell down. I just take my SAK and use the  small screwdriver wich comes in the corckscrew and fixed it. My mother, very surprised, said that she didn’t know that my pen knife had this tool. In a little time she would know other tools and get even more amazed.
She dragged a couch to clean behind it and so she find an old wire of cable TV that nobody care about removing. She asked my help. First I tried just tried do push out of the wall. Didn’t work.. So I take the metal saw to cut most of the cable and so I used Phillips screwdriver to push what I couldńt cut inside the wall. So, my mother said what any SAK fan love to hear: “This knife does anything”.
In this same day in my office in the  work, belive or not, the less liked feature of all was of much help: the multi-purpose hook had some use. We received new compunters at work , the problem is that they come in a box with a metal band aroud it. Nobody couldńt take it out. The thecnical support guys tried to cut it, but the damm thing was too though . I looked at it and noticed that it had a small loop or handle. Tried to pull it with my hand, but it dińt come out . I use the pliers of my Champion, but the handle slipped everytime. Desparetes times, drastic mesaures ! I pull out the little and humble hook and tried it. The little thing worked perfectly ! The hook’s size and the shape seems to have been made for that work, as it had a firm grip in the handle . With some force in the handle, the metal band get lose and it was easily removed. Needless to say that was the hero of the day at my work.. 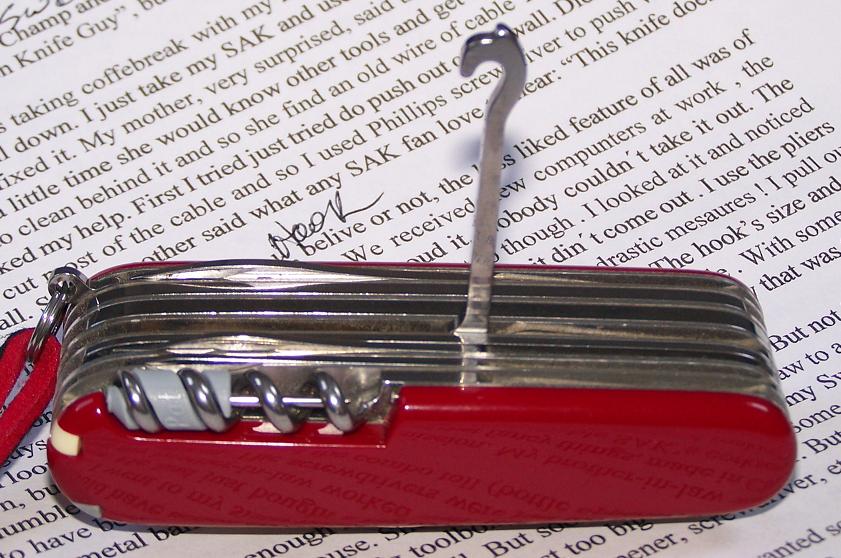 It would have action enough for my little red friend for a single day… But not for the night. After work, I went to my sister house. She asked me to help my brother-in-law to assemble a piece of furniture. He had just bought a big toolbox, full to the top. I just had my SwissChamp. In the beginning my brother-in-law worked well. But soon he had problems. Some screws were in very inaccessible places. The screwdrivers were just too big to manoeuver. But my SAK had the right size. So the Philllips and the combo toll (bottle oppener, screwdriver, etc…) had to finish it. And they did it well.
My SAK had one last mission. My brother-in-law wanted some wine to the dinner. But his corkscrew broke. It was some of that fancy things, made in China, of course. Apparently, it couldńt face a stubborn cork. But the old and reliable SAK’s corkscrew took it out with little effort.
After this day, my mother and sister stopped making fun of this little red knife