I have owned S.I. s and Soldiers but this is the first D.A.K (Dutch Army Knife) I have ever owned.

Almost immediately you notice the small but subtle differences between them.
The finishes of the D.A.K tools are rough (almost crude) looks as though someone just punched them out with a cookie cutter (sharp unfinished edges and scratches in the tools). The tools on the Soldier and the S.I are polished, rounded corners.

Even though Victorinox makes the D.A.K, it boasts the S.I. style blade (more belly). The same design as the Farmer and some other ALOX models.

Having the key ring of the Pioneer makes it different from the other two, my Soldier has a solid rivet and the S.I. has a hollow rivet, both are 97 issue clearly stamped in the blade tang.  The D.A.K has an engraving panel on the front scale with KL 92, the year of issue.  No shield on this model but a silver cross molded into the scale.

All three have the same can opener with small screwdriver. (Side note) I don’t know if Victorinox supplies Wenger with these (Editor's Note- Nope.  Wenger makes their own) but I do know that the Swiss government told Wenger they wanted that style of can opener.
Besides the small difference in the bottle opener and the nail nicks being slightly different (see Civil War by Pwork). All three knives are basically identical.

Read “Minimalism and You” by Defender (be forewarned though Def or I cannot be held accountable for uncontrollable buying of any alox models.)

YOU HAVE BEEN WARNED!!!
Also for more information on the different variants of the Soldier see “Soldier Variants” also by Defender.
My advice is to pick up all three of these models from Tim and try them out yourself.

If you carry the D.A.K. you can have some fun with those snotty people that turn their noses up at Swiss Army Knives. 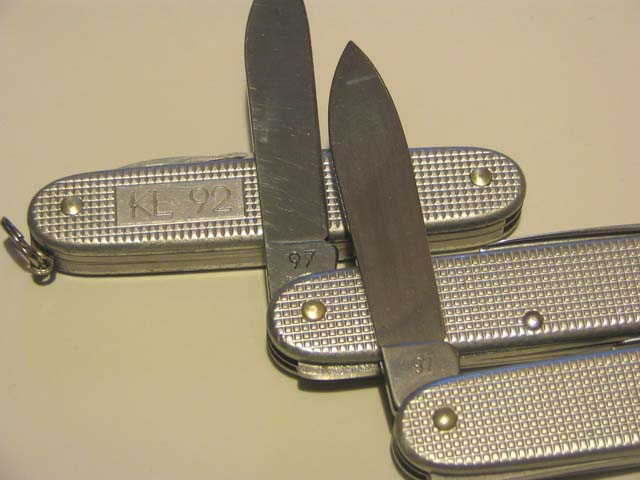 When you take it out of your pocket and they make their snide remarks like “Oh, you carry a Swiss Army.” You can look at them like they’’re stupid and say,
“It’s a Dutch Army Knife.”