The Future of the Soldier

This has been in the news a bit lately, but for those who have yet to hear or read about it, the World Trade Organization is trying to force the Swiss Military to open their knife contract to suppliers all over the world.  The thought is that since China can produce some decent quality knives (I know many are groaning at that, but I’ll discuss that later!) at bargain basement prices, they are likely to “win” the contract.  If that happens, the branding that has adorned Victorinox and Wenger products for years will no longer apply to them, and the discount manufacturers of the Orient will be able to cash in on the reputation.

Could '07 be the last year For Victorinox and Wenger's production of Swiss Army Knives?
And, the rivers shall run red and fire and brimstone shall engulf the air, yadda yadda yadda.  While the media sensationalise the concept that the Swiss Army Knife is no longer Swiss, and that soldiers will start carrying the knife that you can buy at the checkout of Home Depot for $1.99, and retired Swiss Officers start organizations to protest this move, there are a few things that one must take into account.

Many experts agree that with an open tender Chinese manufacturers are likely to be in the lead
First and foremost, while the contract must be open to any who wish to tender, there’s nothing to state that any of those tenders have to be decided on, or even considered.  As with many contract requests, it is probably just a formality, and it will be awarded to Victorinox after a suitable amount of stalling has passed.

Second, the military knife order is such a small part of Victorinox’ or Wenger’s actual production amount that they could easily fill the prder to the military for one Swiss franc.  I doubt even oriental companies would be able to match it, and I’m sure Victorinox would do it if it became necessary.  After all, they did purchase Wenger to keep the Swiss Cross trademark within their borders.  Remember, Victorinox or Wenger could fill the entire Swiss military order in less than a day!

Shortly after the German Army upgraded their issue knife from the 108mm size to the 111mm
size, the 108mm series dried up and was discontinued
Third, Victorinox has stated publicly that they have faith that the contract will be awarded to them.  Many famous people have made many famous statements that have come back to haunt them (“Read My Lips, No New Taxes” George Bush, “640k should be enough for anybody” Bill Gates) but Victorinox isn’t the kind of company to issue statements like that arbitrarily.  While it isn’t and shouldn’t be public knowledge, I would think that after a hundred plus years of working together, Victorinox probably has more than a few contacts with the powers that be in the Swiss Military, and I wouldn’t be surprised if there was some kind of informal arrangement between them.

Are the beloved ALOX models destined to be extinct as well when the new models come out?
The other important facet of all this that’s being overlooked is what will happen to the ALOX knives?  All of the 91mm ALOX knives are based on the Soldier design, but the new contract calls for a locking, serrated blade, saw and phillips screwdriver, as well as a belt sheath.  To me, this would suggest that Switzerland is following Germany and Holland into the realm of the 111mm models, since all of those features are available in that range, and would require a complete redesign of the ALOX models to accommodate.

So, are we looking at a 111mm model with military scales, or are we looking at a redesigned ALOX model?  If Victorinox goes the 111mm route, which is more likely, will there continue to be an ALOX line?  It will probably continue, but remember that the entire 108mm line was cancelled after Germany stopped buying 108's for their military.  The ALOX models have more in common with the 108mm models than one would think.  As with the 108mm series, the parts are only compatible with other ALOX models- the blades and implements are a different size than the cellidor 91mm counterparts.  While the ALOX models may be reasonably popular, most folks are more accustomed to the Officer’s models, and it may prove to be more than it’s worth to produce, stock and manufacture parts for a separate line of knives.  I doubt it, but it’s possible. 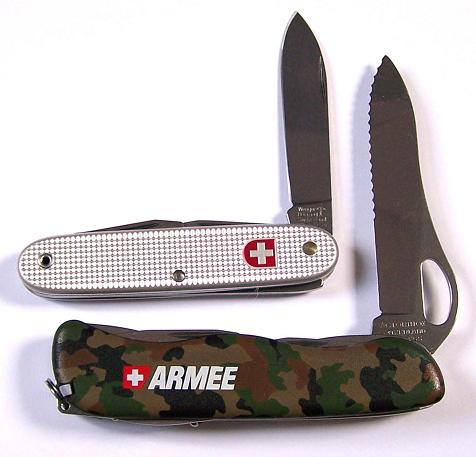 An OHT variant like this one, already available for soldiers to purchase may be the next issue model
If they decide to redesign the Soldier knife instead, well just imagine how cool it would be to have a locking serrated ALOX model with a saw!

All of this is speculation though, and I have been known to make statements that blew up in my face, so by all means, feel free to laugh at this in two or five years when this mess is well behind us!