Even before MacGuyver hit the airwaves, the Swiss Army Knife was well known as the knife that could do it all.  Most people believe that anything can be accomplished with a SAK, and that most SAKs have every tool you will ever need.  Well, SAKs come in all shapes and sizes, but for those folks that absolutely have to be prepared for anything, Victorinox has offered the SwissChamp XAVT!

The Mighty XAVT- perhaps the biggest useable pocket knife on the planet!

Boasting 80 separate functions, the XAVT is truly the “do it all” type tool.  Need to open a can?  It has two separate implements for that.  Need to scrape away that grey gunk on a lottery ticket?  It has a great chisel/scraper that does that.  Need to open the back of your watch to change the battery?  It not only has a case opening blade, but it also has a small eyeglass screwdriver in the corkscrew to undo any little screws that might get in the way.  Plus, it will tell you what altitude you are at, when to get up in the morning, what the weather will be like, pick your teeth, write your memos, clean your nails, fix your computer, cut branches for snares, light your darkest hour and magnify the fine print on your mortgage renegotiation agreement, and all that is just for starters.

Victorinox suggests that this is just a collectable (that much is actually written on the instructions), and I would have to say that I agree with them.  At about a pound, it’s not the kind of knife you could slip into a pocket, even in cargo pants.  Chances are you’d be walking with a serious limp by the time you got where you were going if you did try it, and perhaps in need of some physiotherapy within a week.  Pictures don’t do this monster justice, and although I had seen many pictures of it, it just didn’t compare to actually holding it in my hand.

The XAVT is actually wider than the SwissChamp and it’s predecessor the Champion put together!
Of course one might be surprised to find that this is not the biggest SAK out there, nor is it the first “everything and the kitchen sink” type SAK.  The XAVT is actually part of the Champ family of Victorinox knives that ranges from the 58mm MiniChamp with 16 functions (several versions of this model exist) to the discontinued Champion (27 functions), SwissChamp (33 functions), SwissChamp XLT (also known as the CyberTool XL with 50 functions), discontinued SwissChamp XXLT (72 functions), and finally the XAVT. topping the scale with 80 functions.  The XAVT is the biggest model produced by Victorinox to date.

The SwissChamp XXLT for the longest time was the King of the Mountain and actually included a jet flame lighter built into the center of it.  Unfortunately, due to problems with the lighter and Victorinox’s lifetime warranty, they were seeing too many returned and eventually discontinued all three lighter models, a series that also included the SwissFlame and CampFlame.  In addition, these models were never imported to the US as they didn’t meet requirements for being child proof.  The XXLT can still be had, but has been fetching a fair amount among collectors, some going as high as $800, but most being between $300-500.  For comparison sake, the street price of the XAVT is about $300

Wenger has produced a much bigger SAK, what is referred to unofficially as “The Giant” or “The Every Implement Tool (EIT)” which features everything Wenger makes, including two sets of fixed pliers and a set of folding pliers, laser pointer and divot repair tool, all the way up to a flashlight and compass.  Weighing in at two pounds, eleven ounces and 8 inches thick, the Giant is equipped with a whopping 85 implements and a grand total of 110 functions.  It is the undisputed king of SAKs, but due to it’s size and obvious awkwardness, is not terribly functional and is best left to being a display piece.  And, at $1,200 US this isn’t the kind of SAK that you would want to take out and scuff up anyway!

The XAVT on the other hand may be awkward, but it is functional.  It doesn’t fit the hand as well as most knives and probably isn’t the best choice for EDC, but it could be used if so desired.

Both the old and new styles of magnifying glass are included on the XAVT.
Naturally, the XAVT has some interesting features over and above it’s raw size, which is impressive in it’s own right.  As with any other decent manufacturer, Victorinox is always tweaking the design with small improvements, and recently they completely redesigned the magnifying glass with a one piece molded plastic model rather than the old plastic framed glass model.  Well, the XAVT has both styles.  In the last year Victorinox also added a small rough patch to the backside of the multi purpose hook so it can also be used as a nail file or match striker.  Well, the XAVT has both kinds of hooks as well.

Eight double ended bits are included, making it extremely handy
Two separate bit drivers are also included, and they each fold over a tool caddy containing 3 double ended bits.  Two more bits are stored in the driver itself, giving a total of 8 double ended bits, or 16 bits in all.  And, of course the drivers can be used on small nuts and bolts as well, adding a serious level of utility.  If I hadn’t known better (experience with Victorinox products has shown me that they never miss a thing) I would have though the doubling of the bit drivers was a cheap way of making the XAVT bigger, but I was happy to see that the extra driver did indeed have a purpose- there are no other tools to cover the second bit caddy, and they certainly couldn’t do any less than offering all the bits on this model!.

Plus models come equipped with a pen, pin and eyeglass screwdriver in addition to the standard toothpick and tweezers, but not usually all on the same side!
Even the handle scales on this model are impressive.  The “back” side carries all the usual SAK type tools- toothpick, tweezers, pin and pen, which is something I would like to see on more models.  The “front” scale with the shield on it also has a digital readout which ordinarily provides the time.  There is also an alarm feature on here (I tested it, it’s at least as loud as any watch alarm), but that’s not all.  The XAVT also includes a barometer, stopwatch, altimeter and thermometer.  Admittedly, many watches nowadays can do all that, but many cost as much as the XAVT, and few have all the other options and functions of this knife!  Interestingly enough I thought that the single button control (the shield acts as a button) would be awkward to use with that many features, but once again I was happy to find that it is quite intuitive and simple once you figure it out.  Pressing the button serves one purpose, pausing serves another, and holding the button down serves yet another.  The only word I can think of is “ingenious.”

In addition to the afore mentioned bit drivers, the XAVT also has seven other screwdrivers (including the one in the corkscrew) and all the standard SAK type tools- can opener, bottle opener, scissors, reamer/awl, file/metal saw, wood saw, lanyard ring and so on.  It also has a total of five separate blades- standard, pen, serrated, electrician’s and pruner blade.  Six if you count the watch case opener as a blade, although that’s not usually used for cutting.

The Soldier’s awl.  This version of the awl is usually only found on the ALOX scaled models.
Plus, it has built in folding pliers, and on top of the regular rear mounted awl with sewing needle, it also has a Soldier type reamer in the main body.  That design is only available on ALOX models like the Soldier, Farmer or Pioneer series, so it’s kind of neat to see it on a cellidor scaled model.

Lastly, the LED light is definitely worthy of note.  It’s a small single bulb LED used on many other “Lite” models such as the Huntsman Lite and CyberTool Lite, and it’s bright enough for most minor jobs.  It doesn’t compete with the dedicated lights on the market but for checking the fuse box, finding the key hole or any other small jobs in the dark it is well suited.  The best part is, this flashlight won’t roll away if the surface you prop it up on is slightly uneven!

This is one flashlight that won’t roll away when you are trying to work.
Of course there is a lot more to the XAVT than just the stuff I have mentioned.  If I were to go into every detail on what is arguably the biggest pocket knife anyone is likely to carry (Wenger’s Giant is too unwieldily!)  Then I would need at least half of this issue of Tactical Knives!  Overall I would say that this is one of those knives best left to the collector, and if you really want to have a bigger SAK than just about anyone you are likely to meet, then the smaller XLT or the standard SwissChamp just might be somewhat more manageable, both in your hand and in your pocket! 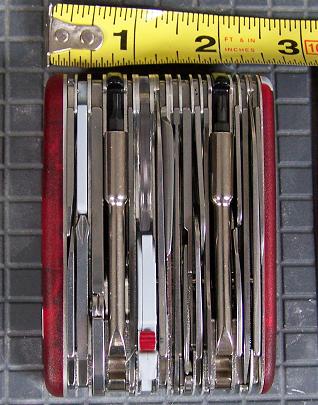 Oh, and did I mention this thing was BIG?