One of the most common questions that gets asked in the forum is “what is the purpose of the hook?”  It seems that the poor utility hook on the backside of any 91mm Victorinox knife produced since 1991, that are also equipped with scissors really does get no respect.  Well, here’s an opportunity to look into it a little bit closer, and perhaps gain some insight.

The hook is so useless that the XAVT is equipped with two!

The hook, as mentioned, debuted in 1991 on the backside of 91mm models that were equipped with scissors.  The hook is rated to hold up to approximately 220 pounds without breaking.  Pretty impressive for a small hook, but really, what good is it?  The facts are interesting, but not really all that helpful in deciding just what it does.  Fortunately, loyal SOSAK members are working around the clock and around the world to help find answers to these important questions and more!

The idea behind the hook was originally for carrying packages tied in string or twine.  This is an interesting idea, especially as most places had changed to plastic bags long before 1991, and other than the odd package in the mail, no one really ties packages these days.  Or do they?  Perhaps not for consumer goods going to the end user, but all the things you buy individually have to come from somewhere.  Newspapers for example come bundled tightly by those nylon straps, as do catalogues and other printed items.  Many of them are bundled in quite large loads and carrying them by the straps are the only convenient way to do it, but those straps also dig into your hands terribly.  Enter the hook.

Of course there are a limited number of folks who have to deal with that kind of thing, so why make it available on every knife?  Easy- that’s not all it’s good for!

Look closely at the backside of your knife, and you will see a reamer or awl, which is fantastic at poking holes in heavy cloth or leather.  The question remains, once you poke the holes, what then do you do with them?  If you have to thread any kind of like through them, the hook can help greatly with that.  Simply poke the hook through, grab the line with it and pull it back out.  Admittedly, many of the reamers come with a sewing eye in them, but I dare you to try and thread 550 paracord, nylon clothesline or any other type of string you have through it!

Perhaps the thing that I use them most for is pulling the tabs found on many cans nowadays.  From soda cans to food cans, those pull tabs can be a real pain in the butt to get open sometimes.  Naturally they have to be fairly resistant to accidental openings and the like, but that just makes them that much more difficult to grab when you want to.  Watch someone who opens many cans (waitresses, cooks etc) and you will see that they almost always use some kind of small levering device to lift the tab so they can open it properly.  With the hook, you don’t have to put it away once the tab is lifted- you can actually remove it completely with the hook and a little practice! 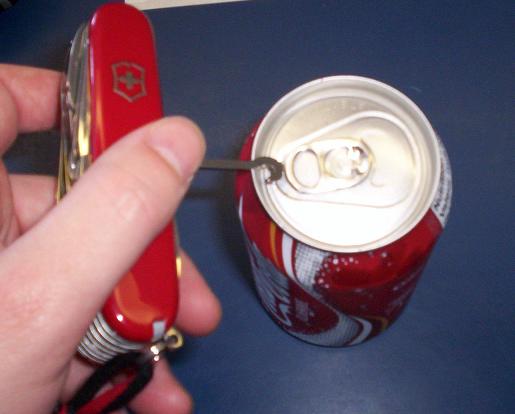 Other members have come up with other ideas that are just as handy- one suggested using it to grab a hot pot handle over a campfire, another member thought it was invaluable for pulling tent pegs and yet another used it to hang his GPS in the car when travelling in a rental with no mounting bracket!

In the last year or so, Victorinox has added one more bit of utility to the hook that many may also find useful- a small rough patch suitable for filing nails or striking matches.  Victorinox’s designers have often proven their ability to create perfectly functional implements with multiple uses, and it seems that the “useless” hook is really no exception!