What I did on my Summer Vacation

Even though summer has barely started in my neck of the woods I have already been quite busy putting the various Swiss Army Knives in my collection to work.  While there hasn't been any life saving jobs done with them (yet) they have proved invaluable for many more minor jobs.

While it may not be visible, the Wenger Backpacker was an excellent companion to my Tilley hat and Casio G-Shock on this excursion

Just a little over a month ago I decided to teach my wife about the fine art of small boating, so off we went to the local sporting goods store to purchase a small 3 man inflatable boat.  Most of these boats are little more than toys, and this one was no exception.  We drove down to a local lake where I used to go camping as a kid and inflated the boat for our mini adventure.  That was the plan anyway!  The electric tire pump I had planned to use to blow the boat up was far too small to fit in the valve, so I ended up using a Wenger Backpacker (Similar to the Victorinox Camper) to cut some fabric to wrap around the head of the pump so it would fit.  The day would have been a complete waste had it not been for the handiness of a SAK.  Of course the SAK also helped greatly to open the box that the boat came in, but that could have been accomplished without it- it just would have taken longer and perhaps not done as neatly!

Without the Backpacker there would have been no boat trip
Just a few weeks ago I left on my vacation to the wilds of Ontario- and I do mean wilds.  The nearest town was an hour's drive away, and the nearest cities are about two hours' drive in either direction!  I spent many agonizing hours trying to decide what SAKs to bring along with me and I finally settled on a Wenger Nail Clipper model (which I never go anywhere without!), a Victorinox SwissTool RS for the pliers and overall heavy work, and a Rucksack that I recently got in a trade- thanks Micah!

Mother Nature doesn't come much better than this!  And no other piece of outdoors equipment works better than a SAK out here
The Rucksack eventually became a gift for my father since I had taken his only SAK two years ago (see the Collection highlights article) and I felt he needed one.  It came in handy a few times over the vacation and I am certain he's still putting it to good use now.

As many of you know from previous articles and forum discussions, one thing I hate is dirt under my nails.  I know that's perhaps not the manliest thing to say, but I just can't stand it, and as a result, the Nail Clipper also saw some serious work.  In fact, devoid of her own nail clippers on the trip, my wife used them and now I have to buy her a set!  Even now that she is back to home to her own nailclippers, she now insists on the Wengers!  High praise indeed for a knife that I thought was a pathetic joke in the beginning!

While the SwissTool wasn't much use in getting out of this mudhole, it was instrumental in getting the ATV running again
The SwissTool RS was the most used SAK with me on this trip.  Following an incident that left me and my ATV stranded in a deep mud hole, the RS was instrumental in severing the rope once I was towed out, and in taking parts of the ATV apart to try and dry them out so we could get it restarted.  As you can see from the picture, I was in there pretty darned good!  And that water was dirty!  After taking the seat off to check the battery, we found that there was about 1/4 inch of mud on it!  While the SwissTool wasn't much help in extracting the ATV it sure came in handy for trailside repairs.

Sometimes the term "trail" can only be defined as "the space between the trees!"
This was my first major outing with the RS model.  i have had original SwissTools for years and I had an X for a while but the RS is a recent acquisition.  I have to say that it didn't take long for it to become my favorite configuration as I think I used the scissors and rescue blade for almost everything. 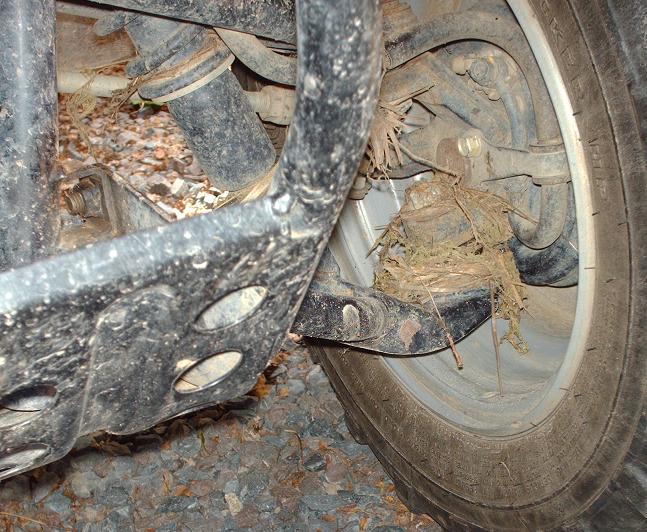 The rescue blade of the SwissTool RS was handy for removing the leftover plant material from the axles, springs and other components
My father is now patiently waiting for a SOSAKOnline carabiner so he can safely take his new Rucksack kayaking!

See you next year Dad!