July's SAK of the Month is a fairly common choice, and a model that no collection is complete without.  The one thing I always wanted to add to my trusty old Camper was scissors- enter the Huntsman!

Long considered to be a staple knife of anyone who enjoys spending time in the woods, the Huntsman is a well equipped model and at only 4 layers, is quite pocketable for EDC.  Outfit it with Plus scales (possibly even in yellow) and you have an excellent companion that is almost impossible to misplace.

The Victorinox Huntsman and it's latest counterpart from Wenger, the EVOGrip S17
There are a few variations of the Huntsman, and as a result, some confusion regarding it.  The Huntsman features a large blade, small blade, scissors, wood saw, can opener and bottle opener on the front side, and a reamer, corkscrew and (post '91 models) utility hook on the back.  Exchanging the corkscrew for a rear mounted phillips changes it to a Fieldmaster unless it has BSA scales.  A Boy Scout logo means that it is a BSA Huntsman, despite it actually being a Fieldmaster with a logo.

Despite some detail changes over the years, a Huntsman of any vintage is always recognizable
in addition to the BSA  version, the Huntsman is also available with an extra layer added in the middle with a phillips screwdriver and LED light, oddly enough called the Huntsman Lite. 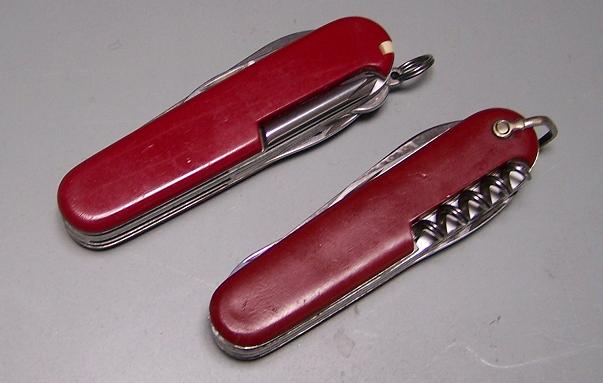 The difference between the Fieldmaster and the Huntsman is slim, unless you look at the other side of the scales!
The Huntsman is so popular that it was chosen as the very first SOSAK Knife Of The Year back in 2003.  If you don't have one, get one.  It's worth having!