Recently Swissbianco managed to convince Victorinox to create another special run of SAKs for SOSAK members.  The first one was a run of Yeoman models, a faithful recreation of a discontinued favorite, but this time it was a Lumberjack model which was recreated in ALOX!

The Lumberjack has been a favorite model among collectors and users alike because of it's small size and functionality.  Of course the standard Lumberjack has also been something of a challenge to find as it was never released in great numbers, and to further confuse the issue, it was also known as the Plumber model in certain markets.

The Lumberjack is a very well equipped and very small SAK
The Lumberjack (or PLumberjack as we've dubbed it) is an 84mm model that consists of two layers with a wood saw in one layer and a main blade and combo tool in the other layer.  Some of the standard cellidor models include toothpick and tweezers, but most do not.  The ALOX models also don't have the toothpick and tweezers as there are no scales to put them in.

The size difference is immediately obvious
When one looks at the ALOX Lumberjack they can't help but be amazed at how thin it is.  At just a little over half the thickness of a standard cellidor Lumberjack, the ALOX version makes a great lightweight and compact SAK that can fit in almost any pack and go anywhere, even with the most weight conscious hiker or camper.

Despite it's smaller size the Lumberjack is well matched to the much bigger Farmer
Where the Lumberjack really shines is that it has nearly all the functionality of the much larger Farmer model, only in a much smaller and lighter package. 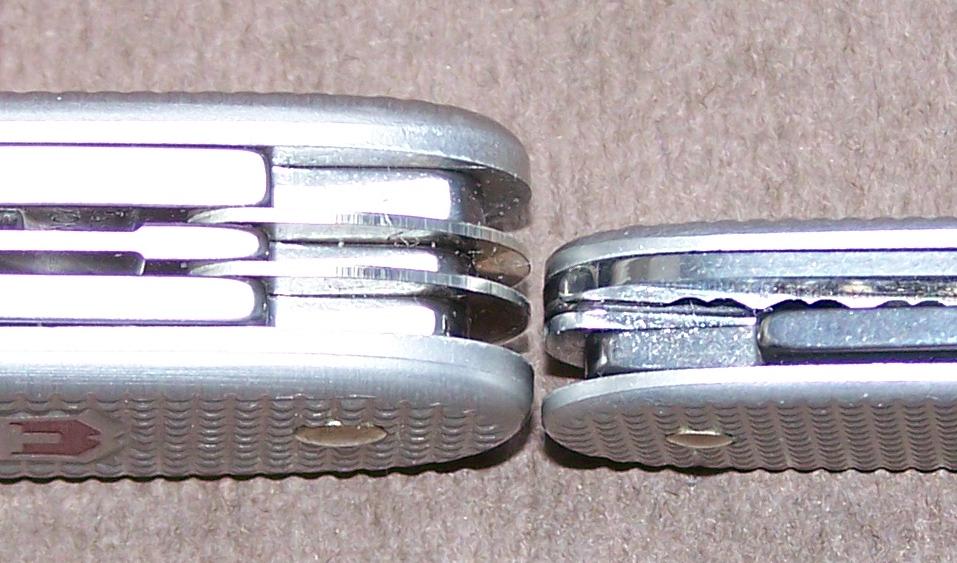 Which would you rather keep tucked inside the pocket of your Tilley Hat?
And what Lumberjack article would be complete without A SONG?