Introducing the heavyweight (Swiss)Champ of the world, the Victorinox SwissChamp!

Red and black SwissChamps
Admittedly it isn’t the biggest SAK in the world- the XXLT, XAVT, XLT, WorkChamp, WorkChamp XL, and Wenger’s Giant are all bigger, and Wenger’s ToolChest Plus is wider, but the SwissChamp is the most popular of any of these models.

Scanned from the 2003 US Dealer's catalugue.  Since then a small nail file/match striker has been added to the back of the all purpose hook, adding one more feature.
Originally the series was started with the Champion model, which eventually graduated to the SwissChamp, then branching out into the whole “Champ Family” which consists of several versions of MiniChamp in the 58mm size, the Champion, SwissChamp, SwissChamp XLT, SwissChamp XAVT, the discontinued SwissChamp XXLT in 91mm and the 111mm WorkChamp and WorkChamp XL.

One layer (pliers) thicker than the Champion, the SwissChamp also incorporates additional tools on the backside.
While the SwissChamp may not be the biggest or the best equipped, it has always epitomized (to me at least) as the ultimate “do-all” SAK.  With the various models available and the variations of the SwissChamp released over the years, one could develop an impressive collection of SAKs just with “Champs.”

The SwissChamp has a very impressive array of functions.
The most important feature of the SwissChamp is that it has an impressive array of tools- the current model is listed at 34 features- and yet is not overly large.  Admittedly it is a big tool, weighing in at 191.2g (6.74oz) it is still easily carried in a sheath, and even carryable enough in a pocket.

One of the more obvious variations, the keyring being on opposite sides.  The black one is the older model.
If you have a SwissChamp then you know the mystique that comes from an impressively built, well equipped SAK like this one, and if you don’t have one, they are well worth experiencing.  No collection is complete without one.  You will be so happy with it you won’t even mind the folks around you snickering about their in house “MacGuyver.” 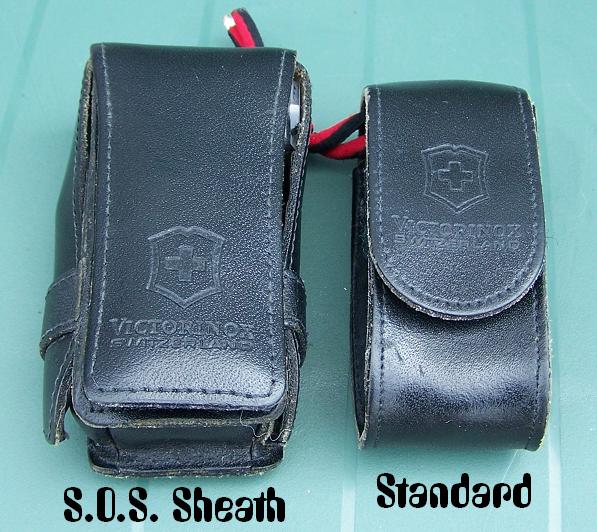 While not a variation on the knife per se, the SOS Kit is an important part of a SwissChamp Collection.