Wenger has been selling the 120mm Ranger series for many years now, and i've never made my preference for them a secret.  I like the bigger blade and i like the bigger saws that are a noticeable amount larger than the comparable Victorinox 111mm size.  However, I have always preferred the one handed opening feature available from Victorinox.  Well, OHT, you have met your match!

Wenger recently issued a one handed version of several of it's 120mm Rangers, and also revamped the line with new Evolution style contoured scales.  Evolution is a great name for these as I feel that this is the next logical step for SAKs in general.  One handed openers have long been a mainstay in the tactical knife world and now the concept has made it's way to Switzerland i am certain we haven't seen the last of them!

The Ranger 57 has more in common with the Victorinox OH Fireman than the OHT.  Unfortunately I don't still have the Fireman I reviewed last year or I would do a more direct comparison between the two.

In addition to the one handed opening, locking blade (which by the way is plain edged!) the 57 also features a wood saw, can opener, bottle opener and a curved gutting blade, with a reamer and corkscrew on the back.  Given that it is a four layer knife, the Ranger 57 is quite a handful, especially with the Evolution style scales.  As with the Fireman, I find this knife to be somewhat large for my fairly small hands.  You would need a much larger set of hands to feel comfortable with the Ranger 57.

Overall, it is a great knife, but I would like to see something more akin to the OHT- a three layer knife with saw layer and a can/bottle opener, and do away with the extra blade.  Some folks may prefer having a second blade, but I feel it should be made optional.  As of this writing, there are no three layer OH Rangers.

I especially like the main blade, which isn't the clip point found on older Ranger models.  Instead it's a nice spear point that works as slick as it looks.

Other implements are typical Wenger fare and familiar to anyone who has a Wenger knife.  The can opener, bottle opener corkscrew and reamer aren't changed any, although the configuration has changed some.  This is perhaps the first time that a corkscrew has been on the front of a knife.  Ordinarily the shield and corkscrew are on opposite sides (except on some promo knives) but on the Ranger 57 the corkscrew is right up front.

An interesting change that we have seen recently introduced on the Victorinox Rescue is the extended tip on saws.  The Ranger 57 also features this little addition, making the longest saw available on a SAK or multitool just that much longer.  It’s a very handy addition, and the kind that once you get used to you’ll never want to be without.

Also, adding to the interesting nature of it's setup is the lock mechanism.  While the lock itself may not be all that exciting, the lock release is actually the shield itself.  And, it has to be pushed significantly into the handle in order to disengage, which protects from accidental unlocks. 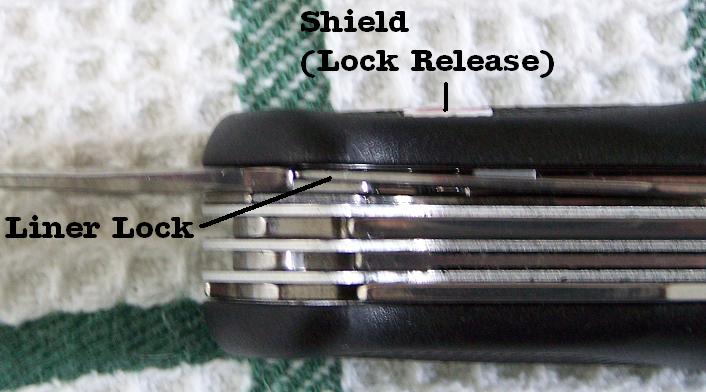 All in all I like these new Rangers, and happily make room for more of them in my collection!