Welcome to the Secret Order of Swiss Army Knives Frequently Asked Questions section.  Here we will try to answer as many of the most common questions bout SAKs, collecting, maintaining etc, as well as any site or forum related questions you may have.
If you don't see your question answered here, there is a short form to fill out to have it submitted and hopefully answered.

1. What does the number stamped on the main blade of a Victorinox Soldier or Wenger Standard Issue model mean?

The datestamp on this Soldier indicates it was made in 2002
The two-digit stamp on the main blade is the year of manufacture and is part of the requirement for the military contract.  Collectors also like this as it can allow them to obtain specific years of significance, or a range of years.  Additionally, while it is technically only the Soldier that is required to have a date stamp, many of the other ALOX models also occasionally have date stamps as they are using overrun blades from the Soldier production.

ALOX is short for ALuminum OXide that is used in metal-scaled SAKs like the Soldier models, the Pioneer series, Farmer etc.  These metal-scaled models (a.k.a. ALOX models) are a bit stronger than the cellidor (plastic handled models- see the FAQ regarding cellidor) and are direct descendants of the original Soldier's knife.  ALOX is most commonly silver but has been anodized a variety of different colors over the years, most commonly in red.
Too see some ALOX models, please see the ALOX article HERE at SOSAKOnline.

Cellidor is the type of plastic used to make the scales on the descendants of the original officer's knives.  These are the familiar red handles knives that most folks think of when they hear the phrase Swiss Army Knife, although they are now available in a variety of colors.

Sort of.  Victorinox's actual production hits around 100,000 units per day, 34,000 is the number of SAKs produced.  In addition, they also produce approximately 66,000 kitchen knives, bayonets, multitools etc per day to bring the total up to around 100,000.

The most common SAK, and indeed the top selling knife of all time is the Victorinox Classic.

6. What is so special about the Scientist and Yeoman models?  Why is everyone always trying to get them?

In a word, nothing.  Scientist and Yeoman models are discontinued and so are coveted by collectors.  Some folks appreciate the tool arrangement on them, as goes for any other model.

7.  Why is it hard to find the models with the built in lighters like the XXLT, SwissFlame and CampFlame?
These models are currently discontinued and such are hard to find.  Additionally, because the lighters on these models didn't meet child safety standards in North America, they were never imported there.  Cutting out such a major market meant that not as many were made, contributing to the rarity of these models.

8.  I see Yeoman models for sale everywhere.  Why are folks having a hard time finding them?

The Yeoman you are seeing is actually an Explorer model that has been retagged as the Boy Scouts of America Yeoman.  It is officially called the yeoman however it is not the only knife to carry the Yeoman name.  6the discontinued Yeoman is the model that collectors covet.  For more information on this, see the Great Yeoman Conspiracy article here.

9.  How can I tell if it's a real Victorinox or Wenger?

Real Victorinox and Wenger knives will be stamped with Victorinox or Wenger on the base (tang) of the main blade.  Victorinox knives might also carry the names 'Victoria' or "Elinox" instead of Victorinox.

You can clearly see the Victorinox stamp on this German Army Knife
10.  What does the umbrella stamped on the blade mean? 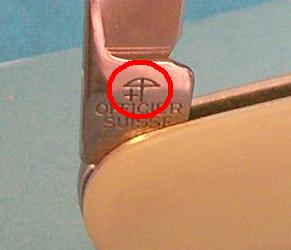 The crossbow is a symbol of quality only available to manufacturers that meet the highest quality standards
The umbrella is actually a crossbow and is a stamp of quality offered only to manufacturers who produce and maintain a strict quality level.  It is a very cherished mark for manufacturers.  Both Victorinox and Wenger carry this stamp, and no other knives do.

SOSAK is actually a hidden sub forum of Knifeforums.com.  In order to join, you must be a member of Knifeforums.com first (REGISTRATION FORM), then request access to the Secret Order of Swiss Army Knives by posting HERE.  Once you have posted here, I will allow you access when I see it, which is usually only a few hours at most.  Once I have given you access, your name on the forum will turn red, and you will see a new forum called SOSAK and you are in.

Your SAK is probably not worth very much.  SAK collecting is still a very small hobby, and at the rate that Victorinox and Wenger are producing knives, we don't even represent a fraction of one day's production.  As such, SAKs are very plentiful, even the "rare" models, and so do not have the same kind of astronomical values that other collectibles have.  There are few SAKs that are worth more than $100, notable the XXLT, the new XAVT, older Soldier models (50 years and older) but really that is about it.  There are some current issue models that exceed $100 as well, but collectors do not usually seek after current issue models.
Additionally, you can check with other members who would offer suggestions, or our in house dealer, Tim.

13.  What are some of the acronyms commonly associated with Swiss Army knives?

DAK= Dutch Army Knife
SAK= Swiss Army knife
GAK= German Army Knife, usually the 108mm model similar to the safari series
OH GAK= One Handed German Army Knife, newer model issued to the German Army, similar to the One Handed trekker model
OHT= One handed trekker, as opposed to the standard trekker model, without the one handed option on the blade
ST= SwissTool
STS= SwissTool Spirit
LM= Leatherman
EDC= Every Day Carry
SWAK - Swedish Army Knife; a 4" bladed sheath knife made by Frost's of Sweden, with plastic Olive Drab (OD) hilt & sheath. Not a SAK, but quite useful in itself.

14.  Where can I find some technical info like blade steels and what years certain tools were introduced?

Technical info can be found all over this site, the SOSAK forum at Knifeforums.com and at both the Victorinox and Wenger homepages.  Here is a selection of common answers:

This is credited as Info by Victorinox -
For both blades we use chrome molydenum stainless steel with 0.52% carbon, 15% chromium, 0.5% molydenum, 0.45% manganese and 0.6% silicium. After a sophisticated hardening process at 1040°C and an annealing temperature of 160°C the blades achieve a hardness of RC 56. * The woodsaw, scissors and nail files have a hardness of RC 53, the screwdriver, tin opener and awl a hardness of RC 52, and the corkscrew and springs RC 49. * The metal saw and file, in addition to the special case hardening, are also subjected to a hard chromium plating process so that iron and steel can also be filed und cut. * The separators have been made from aluminium alloy since 1951. This makes the knife lighter and easier to carry in one\'s pocket. Formerly these separating layers were made of nickel-silver.

There are many models that are no longer made, but the most common ones of interest to the collector are the Mauser, Safari (108mm) series, Scientists, Yeoman, SwissChamp XXLT and some various Golfer models (not to be confused with the current issue GolfTool).  Many times we think we have a pretty good list of most models available, but sooner or later someone will come along with one that has us all scratching our heads!

16.  Where can I find pics of of old and new SAKs to help ID other SAKs in the future?

Currently we have 112 pictures of various models here on SOSAKOnline in our SAK Gallery, with more being added as often as they come in.  If you don't see a model you are curious about, e-mail me at This email address is being protected from spambots. You need JavaScript enabled to view it. and I will see if I can find one for you.

17.  Where do you find old models and how much coin does it take to buy one?

Find old models anywhere you can.  eBay is a good place to look, as is the FELINEVET shop right here on SOSAKOnline.  Other places to look are various Mom & Pop shops, estate sales, antique dealers, flea markets and swap meets.  However, if shopping on eBay, please observe our code of conduct as much as possible- see the eBay names article for details.  As for the amount to spend on them, see the question above "How Much is my SAK Worth."

You can remove the scales by following the directions in the Scale Removal article here at SOSAKOnline.


19.  Can I reuse scales that I took off another knife?

Yes you can reuse scales however they may no longer hold on by themselves and might need to be glued on. Try to use only a small amount of glue (epoxy or a similar thick bodied glue- crazy or superglues may seep into the joints or distort the plastic) in the holes for the pivot pins, being careful not to get any near the toothpick or tweezer slots.