I'm calling this 84mm a "Fieldmaster, one of the knives that Rich at Central Valley Wholesale sold to me for parts; it was in pretty rough shape. Because this knife was so unusual due to the configuration and nail file feature on the square shank Phillips, I thought it was worthy of a restoration effort.

The damage to the knife included chipped and broken main blade, bent pen blade, broken scissors spring, and bent backspring tool pin. Further damage was found when the knife was disassembled; all three of the center liners were cracked.

It was at this point I decided that the damage was too extensive to repair the knife as it was originally. Note that two of the inner liners are full profile, which is not found on more recent production knives.

I also had a vintage 84mm "Climber" with a pair of broken scissors, so plan "B" went into action. The scissors, wood saw, Phillips with nail file from the first knife would be added to it.

The finished 84mm "Fieldmaster" restored with vintage parts including scales and a reproduction built with a mixture of more modern parts. The repro features a nail file blade from a Sportsman as a substitute for the file on the square shank Phillips. 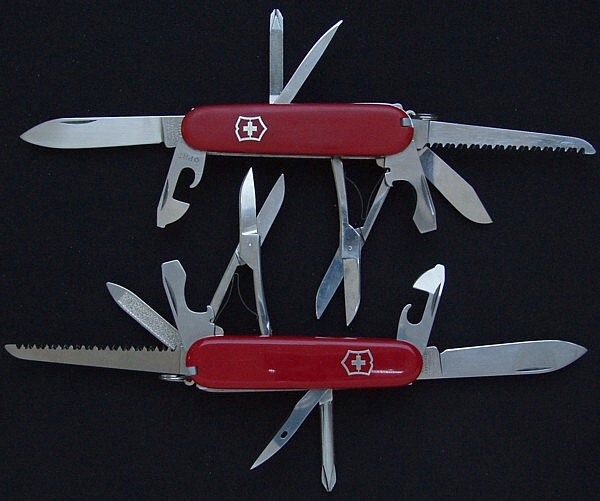