All you are going to need is 4 sheets of regular old printer paper and some scotch tape.  I am sure that folks more knowledgeable than me can tell you about the merits of various types of printer paper (bond, brightness etc) but I used a few pages of the stuff that I got on sale at Staples a few months ago.  Nothing special.  This is going to be the everyman's lightbox.

Step One-  Fold the first two sheets of paper in half.

Step Two-  Tape the ends of the folded pages together.

Step Four-  Do the same with the fourth sheet, only this time, on the other side of the first two sheets.

Step Five-  You should now have something that looks like this

Step Six-  Flip the whole thing over and start taping corners together until you have a box.

Step Seven-  I like to fold in an inch or so on either side of the box to add rigidity and to give reflective surfaces something white to reflect.  I also like to fold the top back a little bit to act as a shade if needed. 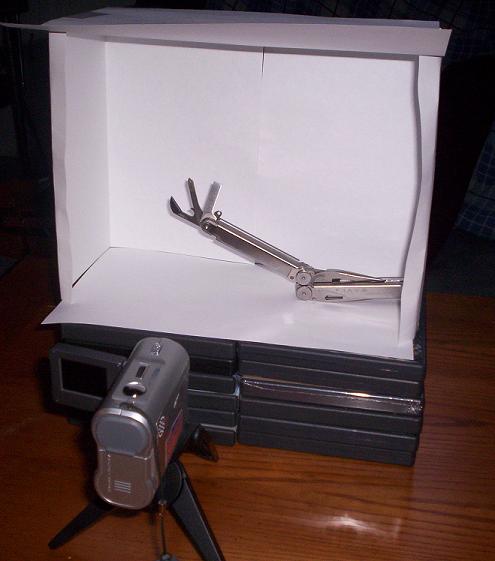 There you go- a fast and cheap (and reasonably effective) light box.  I usually just use it to even out natural light, but I have also used it in darker times by "hiding" LED Mag Lights in behind the folded side panels.  The name of the game here is experimentation.  I have had some good shots and some bad shots with this setup, but I am sure that has more to do with the faulty equipment behind the camera than anything else!