Victorinox has indeed had a few failures that I know of off the top of my head, and I am certain there are more. Anything that a company like Victorinox wants covered up can vanish quickly under a production volume of 100,000 units per day. I am not talking about models like the Scientist or Champion that were merely discontinued because of a replacement model or poor sales, I am talking about models that flopped in a way that one would have a hard time associating with a successful company like Victorinox.

The first model is the Victorinox Sport ratchet, a clunky tool, bigger than the Swisschamp, yet with less features than an Explorer, and the elusive AutoTool, a plier based multitool that is so bulky that it dwarfs the current SwissTool!

` The SportRatchet is an oddity in that it isn't plier or scissor based as most multitools. In fact, it really only belongs in the multitool catagory simply because it really doesn't belong in any other catagory! The main feature of the SportRatchet is a ratcheting screwdriver, which is actually quite ingenious, but also responsable for the tool's excessive size. The ratcheting screwdriver comes with two double ended, standard sized hex bits and uses a liner lock to keep it open in use. As one that has often had a SAK screwdriver fold on my hands in use, this is a great idea. additionally, the SportRatchet features a serrated main blade, the standard cap lifter/screwdriver combo and toothpick and tweezers. Lastly, it has a removeable wrench tucked away inside the main body that can be removed quickly and easily, used and locked back into place. This is again, a great feature, but also consumes alot of space in a pocket tool.

The SportRatchet has a handy wrench hidden in the main body

The Sport Ratchet was produced for a very short amount of time and examples found for sale are generally in good shape as they didn't seem to see much use- probably due to the excessive size and relatively few tools.

Not too many tools out there can dwarf the hefty SwissTool

It's a similar story with the Autotool. These tools are also hard to find, but when one does locate them, they tend to be in good shape. AutoTools are purpose built tools designed as an emergency tool for your glove compartment- hence the name! Apparently, size was not a concern with this tool as it is even more massive than the Sport Ratchet! In fact, it is significantly more massive than the SwissTool, which has often been cited as a "larger than average' multitool!

The AutoTool is a more traditional plier based multitool and features the "normal" tools found in other multis like a variety of screwdrivers, main blade and what have you, but then takes a sharp turn away from the ordinary with automotive emergency based tools like a digital tire guage, flashlight, and even an ice scraper! No, I am not kidding... although at the size of this thing, I wouldn't be surprised if there was a Hi-Lift jack built into it somewhere!

The liner locking ice scraper really does have to be seen to be believed! 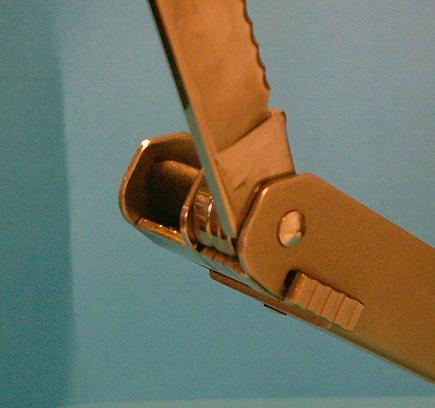 SwissTool owners will recognize this early design of the locking mechanism

The SportRatchet can be found online for between $30- 50 US in most cases, depending on the shape it's in. The Autotools tend to stay within that range as well, but usually closer to the $50 mark more often than not. Both are considered 'must haves" for any collector interested in the old, obscue and/or odd, because there are few odder or more obscure than these! In fact, a certain well known collector that we all know (but whose name I won't mention!) thought that the AutoTool was some kind of knockoff the first time he saw one as it was something he had never encountered before, despite having handled more SAKs than most other collectors will in a lifetime!