I have seen this braid called several things before, including the Survival Bracelet braid, but I am not sure what the correct name for it is.  I just call it a braided lanyard, and i think it looks really cool, as well as providing alot of length in a small package, and retaining the inner strands if you are using paracord.

This one can seem a little complicated at times so I have attempted to add a little to the pictures to help you along.  Please don't make fun of my poor artistic abilities too much!

Step One- Loop the cord a few times as shown.  Make the center loop as long as you would like the finished braid to be.

Step Two- Bring one side under the center loop, then back under to the side it started on.

Step Three- Feed the other side through the loop from the underside.

Step Four- Using the same cord as in Step Three, bring it over the center loop and down through the loop on the opposite side.

Step Five- Run the same cord from under the loop under the other cord as well.

Step Six- Now bring that cord back over the center loop and down through the loop on the side it came from.

Step Seven- Pull tight, starting with the "top" loops, then the "bottom' ones.  Remember, the tighter you pull this one, the less flexible it will be when complete.

Step Eight- When pulled tight, it should look like this.

Step Nine- At this point you basically start all over again, making an "S" loop under the center loop again.

Step Ten- Bring the opposite cord through the loop you just made, from underneath.

Step Eleven- Bring the cord over the center braid and through the opposite side loop. 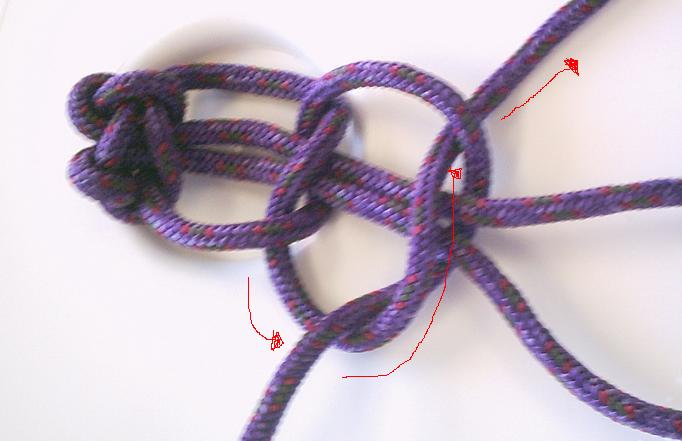 Step Twelve- Bring the cord under the loop and under the other cord, then back over the center loop and through the loop on it's original side.  Keep going until you run out of cord or center loop and you are done.  Then you can either singe the cords or knot them, put beads on them, or whatever suits you.
Don't forget the paracord in Rotokid's Shop!