The Round Knot, also called El Knoto Roundo is similar to the Square Knot except it looks a little fancier.  It isn't any more difficult to tie, and is also great for a beginner like me!

First off, just like the square knot you will need two cords of the same length, and if using paracord, remove the inner strands.  This braid is best done with flat cords.

Step One- Lay one cord over the other at the centers of each cord.

Step Two- Fold one cord over the other.

Step Three- Fold the other cord over the first one.

Step Four- Bring the opposite strand of the first cord up over the strand you just folded over, and under the next one.

Step Six- Unlike the Square Knot where you laid the cords parallel to the knot, in this one you are folding the cords in a diagonal across the knot.

Step Seven- Fold each cord over to the opposite corner of the knot.

Step Eight- Go all the way around the knot like this, until you have all four cords going to opposite corners.

Step Nine- Run the last cord under the first to make the knot look like this, then pull tight.

Step Ten- Once pulled tight, it should look like the same knot you started with.  Simply repeat steps six through ten until you have the length you desire. 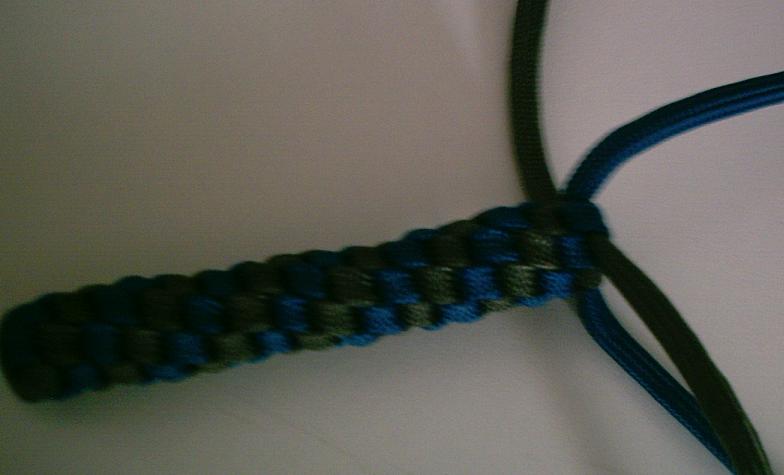 Step Eleven- After the first few knots you will see it start to take shape.  Once you have the length you like, you can either knot off the ends, cut them and singe them or use the completion knot like the picture at the beginning.