Battle of the One Handers

At the risk of turning into another SAK vs Multi discussion, I thought I would compare and contrast the one handed flagships from Victorinox and Leatherman.  On one side, we have the Victorinox One Handed Trekker (OHT), and on the other, the Leatherman Wave.  Rather than try to decide how to compare a plier tool to a knife, I am going to look at it as which would be preferable if one was to only carry one of them.

First, lets meet the contestants.  The Victorinox One Handed Trekker is a 111mm model featuring:

The Leatherman Wave is a plier based tool which features:

At first glance, it looks like the Wave is off to a running start with a few more features than the OHT, including some daily use tools like the scissors and the extra blade, giving two separate, full blades, versus the OHT’s single partially serrated blade.  But, this isn't a battle of the tools, it is a showdown of one handed versatility.

Both open easily and lock solidly witha liner lock system.  They are both easily oriented in the hand, and both quite easy to fold one handed when you are done, although the OHT's lock is "backwards" or "left handed" but to be honest I personally have never had a problem with it.  In fact, I had never even noticed it was left handed until someone pointed it out to me.  It feels quite natural in the hand that way.
The Wave has two OH blades to the OHT's single partially serrated blade.  This gives the Wave a slight advantage in versatility because it offers two complete and separate blades.  Additionally, the serrated blade has a textured thumb ramp to help you identify which blade you are opening before you open it.  This is a very handy feature.  The serrated blade is also a very useful sheepsfoot type blade, great for belt or rope cutting without endangering whatever is underneath it.  The plain blade supports a clip point and actually seems kind of puny.  This is of course a common problem with multitool blades so shouldn't be a big concern.  To be honest though, I think a thinner, broader SAK style drop point would help this immeasurably.  The biggest drawback to the Wave is the fact that it is almost completely useless to a left handed person as the blades are only open on one side.  This may not be a big issue for the majority of folks, but lefties will pay a hefty price for this tool and not be able to take advantage of it. 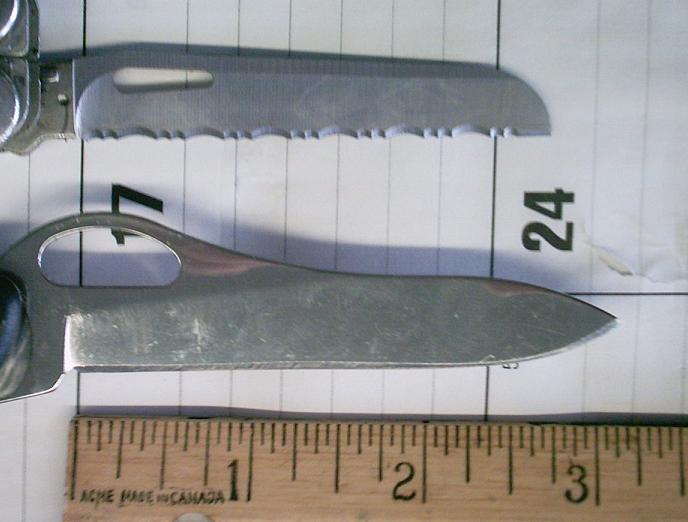 By comparison the OHT is quite a bit more balanced looking and feeling, but that has alot to do with the fact that it is a knife based tool rather than a plier based one.  The blade is quite large and may be less sheeple friendly as a result, at least until they see the familiar shield or can opener and realize it's a trusty Swiss Army Knife.  The OHT blade comes from the factory partially serrated, and done "backwards" to the traditional 50/50 edge since the serrations are at the point of the knife and not at the base.  Some folks prefer this, some don't, and most usually just grind them off, making a large plain edge.  This is such a common practice that we have an instructional article here at SOSAKOnline about it.

Cons
●potentially more intimidating, although only slightly
●no sheath included
●serrations may be an issue for some

Overall, you probably wouldn't go wrong with either of these tools (unless you are left handed!) but considering the difference in price (the Leatherman costs more than twice as much), I strongly would suggest the Victorinox unless you particularily need the pliers.
Def