Collecting Swiss Army Knives is a growing hobby. Just by looking at the numbers if people who are signing up for SOSAK, SOSAKOnline.com, the Victorinox Collector's Society and so on, SAK Collecting is becoming quite an industry unto itself.     It is however also a different ideal, as Swiss Army knives have over a hundred years of history, special runs, upgrades, changes, current and discontinued models, materials, and in many cases, names. Victorinox alone has been known as Victoria Knife Company, Elsener Cutlery, and Elinox in addition to it's current name. Wenger has also been through many names, but usually variations on the Wenger name.

What makes the task that much more daunting is that if you took all of the SAKs ever owned by every member of SOSAKOnline (including the dealers and their inventories!), SOSAK, and the Victorinox Collector's Society and added them all up, it still would not come close to equaling one day's production of either Victorinox or Wenger. Consider that these companies have both been at it for well over a hundred years and you can see how there is a vast untapped market out there, ripe for collectors to ferret out interesting new, and possibly unheard of models and tools.

The drawback is that SAKs were never really considered collectible until fairly recently. For the most part they were tools- tools of exceptional quality, but tools nonetheless, to be used and used hard. Because of the quality and low price of these tools they were rarely, if ever, returned for the ironclad warranty repair or replacement and so the vast majority of these knives are in very sad shape.

The upside of that, and the fact that even though more people are collecting than even 5 years ago, is that prices on various specimens are still quite affordable. Some vintage Soldier models (50+ years) sell for upwards of $150 on average, while most can be had for a fraction of that price. There is also a few models like the XXLT or the Mauser that have fetched exorbitant sums on eBay, but even so, compared to virtuall;y every other collectable, the prices are quite fair. Try looking for Beanie Babies, antique lighters or original automotive parts for vintage vehicles and you will see what I mean.

As one of the premier SAK collector (and user) reference tools available, members of SOSAK have taken the time to assemble the following guidelines for collecting SAKs wisely.


1. Collecting knockoffs is not recommended. Unless you are following a certain scheme (like Spork's GAK collection) or find one you are particularily interested in for whatever reason, purchasing anything other than Victorinox or Wenger is almost always a waste of time and money. Knockoffs are virtually worthless, especially to collectors. Some similar type knives (not considered knockoffs) are acceptable however. Manufacturers like Aitor for example, produce a decent product and have their own fans.  A collector should be able to tell the difference between similar type knives and cheap knockoffs.

2. Try to specialize as much as possible. SAKs come in a very wide variety, from different eras, tang stamps, colors, sizes etc and it is difficult and expensive to try to collect them all. Some folks like 2 layers, some like 4 layers, some only like Victorinox, some collect Champs.  Each member is not limited to those but it does help them look in a specific direction.

3. Remember, there is little to no collector value on SAKs. No matter what the seller says, that "discontinued Champion" is not worth $50, and neither is that special Wenger for the "elite ski patrol." Are there SAKs worth $50 or more?  Definately, yes, but the coveted Yeoman or Scientist models aren't, unless you really don't mind spending the money on them.

4. If they don't have "Victorinox," "Elinox," "Victoria" or "Wenger" stamped on the tang of the main blade, they are probably fakes. Neither Wenger, nor Victorinox makes knives in a factory in Beijing or Huntsville, Alabama. Victorinox makes them in Ibach Switzerland, and Wenger makes them in Delemont Switzerland ONLY.  They do not contract work out to the Phillipines, Mexico or Hong Kong, no matter what the description says.

5. Join a respectable discussion or reference group. SOSAK and SOSAKOnline are always accepting new members, as is the Victorinox Collector's Society. When in doubt, ask around and see what others have to say on the matter. If it's a convincing fake, someone else has probably already fallen for it, and will happily help steer you clear. For SOSAK and SOSAKOnline members, we even manage to play by some rules of conduct so you don't have to worry about another member stealing your find away from you.  Just check the eBay list on SOSAKOnline for details.

6. Keep your eyes open. SAKs are sold almost everywhere. I have even seen them in small fishing and convenience stores in the middle of nowhere. Often a sales rep will convince the owner of a Mom & Pop shop to buy an initial order of $1,000 or so, and those knives will sit on the shelves for years collecting dust until a collector comes by and see bnib (Brand New In Box) examples of knives that have been discontinued for years. Usually, a very good deal can be arranged on the whole lot of them, and the cost can be quickly recovered by selling off the extras within groups like SOSAK or the Victorinox Collector's Society or on eBay.

7. Enjoy yourself. The minute you realize you are not having fun, stop it. Wait a few weeks and see if you feel like going back to it. If not, consider selling your collection to finance whatever else you may have gotten interested in. If you do come back to it, enjoy it. There are literally billions of SAKs out there. You won't miss that much by stepping out for a while but you will miss alot if you force yourself to stick with it.  Hobbies are ways to relax, and if it isn't relaxing then it isn't worth doing.

8. Take chances on knives. Both Victorinox and Wenger will repair knives that are sent in to them. It is a lifetime warranty on the knife, which means if you are the 16th owner, who bought the knife used from an estate sale, and it turns out it was run over by a steamroller and dropped in the septic tank and left for a few years, they will fix or replace it at their discression. If you include a note telling them that the knife is important to you, they do try to be accomodating in returning it to you after repair, rather than replacing it. I bought a destroyed (utterly destroyed!) red Pioneer from eBay for under $1 and sent it to Victorinox for repair. Brand new red Pioneer in box in less than a month. Don't take advantage of Victorinox or Wenger's generosity but feel confidant in taking chances.

9. Store your collection properly. SAKs themselves are virtually impervious to most forms of corrosion but the boxes, instructions and other accessories may not be. Sheaths, special scales (wood especially), as well as delicate parts like springs and tweezers are all susceptible to moisture, mold or rust. As with any collection or investment, it pays to look after them. There are a variety of ways to store them, but the easiest way is to just keep them in a box or drawer. I use a plastic (Rubbermaid style) drawer rack for all boxed SAKs and a fishing tackle box for SAKs without a box. The individual sections are the perfect size for storing a variety of knives, and can easily be fitted with felt or foam for an added degree of protection. Also, a small package of silica gel like the ones found in electronics boxes can help keep moisture from causing problems. 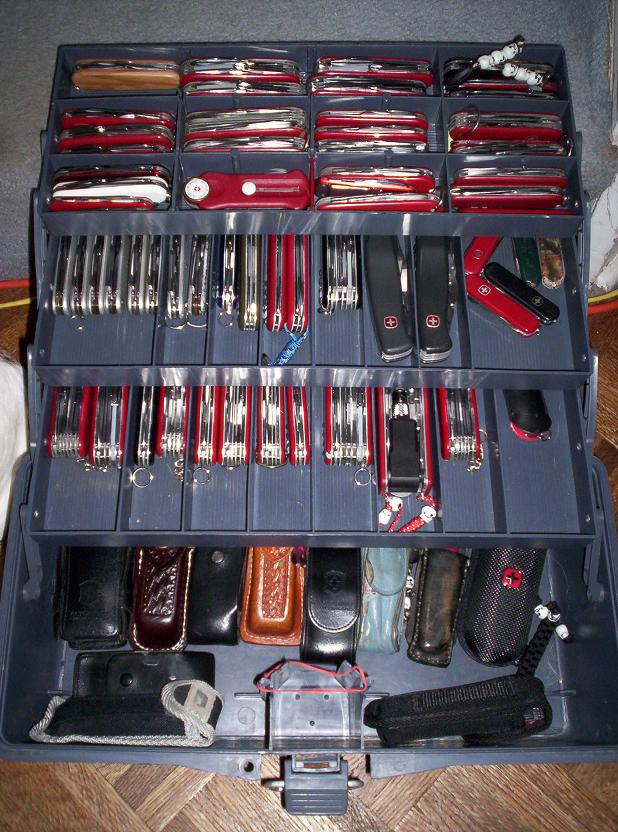 Those are the basic "do's and do not's" of SAK Collecting. It is by no means a complete list, nor are the rules airtight. There are always going to be exceptions that don't seem to be covered by this, and those that fly in the face of most things written here, but those are situations to be decided on by each individual collector when the opportunity presents itself. This list should be regarded only as guidelines for the serious SAK Collector.