Aitor is a company with a long story in knife making. They started in 1939 and focused on the hardware and working knife markets, later on they began producing fixed blades and folders for outdoors sports.

Their next step was to produce knives for different armed forces and police departments (they supply the Spanish army with their combat knives).

As you can see from the picture below, their first “SAKs” (they aren’t Swiss Army Knives, but I can’t think of a better term) were almost exact copies of Victorinox models like the Waiter, Climber, Spartan and Huntsman. Aitor never tried to make any model like the Work-Champ or Swiss Champ, four layers seems to be their limit.

However, the “SAK” I’m going to review is not one of the first red ones, but one of the latest ones intended for the army. It has the same tools as the Victorinox Climber, but instead of the small blade it has a nail file. The handles are made of green plastic (the same as the Mauser and GAK handles), and instead of the Aitor logo it has the Spanish Army shield. The clossed length is 105mm (around 4”) and the blade is 80mm long. This is my first review, so don’t expect much.

The first thing that impressed me was the weight, it is a very hefty knife (specially when compared with the equivalent Victorinox or Wenger SAKs). The size is very handfilling and comfortable. The walk and talk of the blade and tools is very good, but I’ve seen some at stores that aren’t as good. The backsprings are really strong (the blade is a little too hard to open). All the tools are bigger than the ones on Victorinox and Wenger knives, the Aitor knife feels a lot like an oversized version of the Climber. I like that, specially in the blade which has a lot of belly and is a bit thicker than regular SAK blades, with the only exception being the awl. It is too big and blunt to be of any use, Wenger and Victorinox awls are much better. You can see the knife I’m reviewing in the next picture, it’s number 6 (called “Gran Turista”).


The scissors are quite different from the Victorinox or Wenger ones (although the “Red” series of Aitor “SAKs” uses the Victorinox design, or a very similar one). They have no spring, but the hole is big enough to comfortably put your finger (and I have big hands) and operate them as regular scissors. They have a nice size, beefier than the Swiss ones. My only complaint is that the key ring sometimes gets in the way of the scissors, when you try to close them it gets between the two handles of the scissors and prevents proper operation.

I found the blade to be very good. Although sharpness out of the box was non-existant I got a hair popping edge on it after some work. It was not very easy to sharpen for the first time, but maintaining the edge was easy.

The can opener is of the “hook” variety, it works very well but I do miss the little screwdriver.

Compared with a Victorinox Climber, I’d say the Climber is a better city knife (lighter), while the Aitor might be a better outdoors knife (I need to get one with a saw) because it seems to be more rugged. I carried it with me for a few days and it was as handy as any medium SAK, it does feel a little more “heavy duty” and can probably take more of a beating than a regular SAK, but I have other tools for that kind of work.

I saw a couple of Aitor saws, and there is some variation in the teeth styles, none seemed to be as good as the Swiss ones, but I haven’t tried them out so it wouldn’t be fair to say that they don’t perform well.

There are also lots of “picnic” models and a couple called “Al-ligator” that have nifty looking pliers on them (somewhat similar to Wenger’s Pocketgrip). 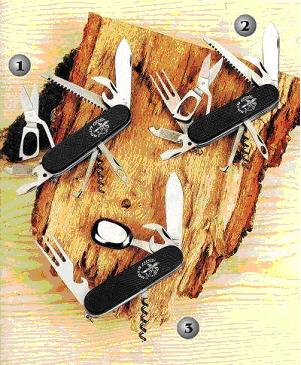 I talked to a rock climber, and long time friend, who has been using an Aitor “SAK” on his trips and he told me it had held up quite well under abuse. I know he likes knives, but he isn’t as obsessive as me when it comes to field maintanance. He used a “Gran Police” (#1 in the picture below) and a “Gran Montañero” (#5 in the picture above) for a few years and was very pleased with them both. He only retired them because I gave him one of the new OH-GAKs. He isn’t much of a knife knut, but I he knows his gear and if those knives were good enough for him I’d take them into the woods without any doubt. He didn’t use them on wood too much, he mainly opened cans, cut some cord, prepared food and stuff like that.

My brother got one as a gift from my Spanish trip and he likes it a lot. He is a GAK and Mauser kind of guy (he actually found a NIB Mauser at a bus station!, the SOB isn’t even a collector!), so I can see why this knife appeals to him. So far his only complaint was that the blade was a little too hard to open.

Retail price is around 30 dollars, depending on the model, of course.