The Swiss Army Gnomes kept me up all night! 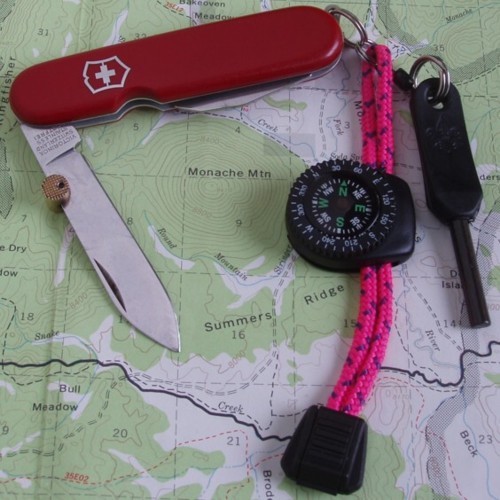 So here is my newest mod (so fresh it’s still steaming!) a One-handed Waiter. This knife was modified specifically for inclusion in a survival kit that never seems to get finished. My previous strategy for a survival kit SAK was to attach a short “bite” fob or lanyard that could be clenched in the teeth to assist opening the knife in the event one hand was injured or occupied.
I had 3 Waiters to choose from, the one I chose was without the toothpick and tweezers slot and had the smoothest action. The reason for the handle choice is that I have found these scales are generally full thickness with no hollow areas. This was important because it would have left gaps when the clearance notch was cut for the thumb stud.

The thumb stud was made years ago out of ¼’ brass rod for a small lock back. Basically the same concept as the “Bandit” stud, the slot is actually dovetailed to fit the wedge shape of the blade (won’t fall off if the screws loosen) and there are screws on both sides.
The last thing done was to square the corners on the inside curve of the Combo blade for scraping a ferro rod.