Ok, so probably none.

Nope. The Phillips driver on the back of the knife is horrible. I would rather cut open my arm, saw a bone off, and whittle it into a Phillips driver than mess around with that t-handled atrocity. Ok, it's really not that bad, but the design lends itself to scraped knuckles and stripped screws, not to mention a gnarled driver head. It's pretty hard to get as much torque as one needs with that t-shape going to the right spots, and it seems that slippage is a bigger problem than with the 90/180 degree true Phillips (placed with the magnifying glass or LED). Not to mention that it is very awkward and often impossible to reach many screws given the position your hand needs to assume to use it. Myself and many of my SOSAK buddies much prefer the regular screwdrivers, and that's saying a lot. So why not just get a knife with the 90/180 degree drivers? Because apparently Phillips screws are not as common as menacing hay bales wrapped with twine (I'm talking to you, Mr. Hook), and the only models with Phillips are pretty bulky with excess tools. The discontinuation of Vincent's buddy the Scientist and my pal the Yeoman was a big mistake, and now I have to choose between having the SUV of multi-function knives in my pocket or having the hex/bit driver, which is nice, except I've got a better chance of getting at President Bush in the White House than getting at the blade with the robust head of the driver in the way.

2) It can hold a mini-screwdriver. That thing is cool, and I don't even wear glasses.  More gadgets are more gooder.

3) It can pick knots. My clunky hiking boots have a penchant for getting knotted, and the corkscrew is good at slipping in there and tugging things out, whereas the awl tends to cut the shoelace.

4) It provides more clearance for the straight pin. With the Phillips, the straight pin has to be seated as far as it can go or else you'll end up with a bent pin, and nobody wants that.

5) It's dangerous. Sure, in all of those tactical fights to the death you can put both the Phillips and the corkscrew between your fingers by holding the SAK in a clenched fist, but if you tell your enemy to hold on for a second, unscrew the mini-screwdriver, screw it in backwards, and punch with that little driver puncturing into your opponent, you're sure to win some respect in the 'hood.*

And the corkscrew SAK's are the official SAK of the fellowship. Has anyone read our pledge lately? 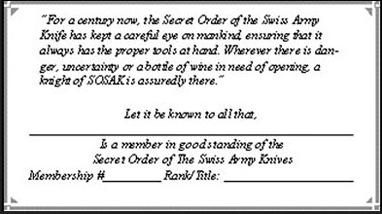 "For a century now, the Secret Order of the Swiss Army Knife has kept a careful eye on mankind, ensuring that it always has the proper tools at hand. Wherever there is danger, uncertainty or a bottle of wine in need of opening, a knight of SOSAK is assuredly there."

Good luck opening a bottle of wine with a Phillips driver. The bottom line is that I'll take the combination of the Phillips and magnifying glass over that sorry excuse for a Phillips on the back of the knife any day. Your mileage may vary, especially if you're not intoxicated. Damn Phillips people.

*You may also win a life sentence.