The Swiss Army Knife Vs. A “Real Knife”

Through all the years I have been reading and participating in the internet forums, I cant count how many times people have laughed at and made fun of a Swiss-Army-Knife. There are comments about its cheap and/or soft steel, its size is no match for the big burly tac-folders, its delicate and could never hope to compete with a decent large fixed blade. Probably the worst thing is that I was one of those people years ago. I would readily laugh at the “Swiss thingy with a corkscrew”.

Several years ago a friend of mine gave me what I think is the first SAK I ever owned, a red Pioneer. That started me thinking, wow these are not so bad after all. Seemed well made and sharp. After I got heavily involved in the internet forums back in the days of RecDotKnives (not to be confused with Rec.knives) I fell back into the frame of mind that told me “no way can one of these ever compete with the latest tac-folder”. I had other SAKs, but never took them seriously.

These days, I can say I have used darn near every type of knife out there, tac-folders of all sizes and styles, fixed blades of every type and even a few butterfly knives. Always somewhere in the back of my mind I kept thinking, these knives lack something, maybe cutting ability, limited versatility, low comfort level and many are just plain ugly. For the past couple of years though I have realized the value of a SAK for most anything I do with a knife, whether it is a required task, or just having a little fun. Letter opening to boxes to cutting small trees can be done with an SAK. Try that range of tasks with a macho tac-knife. Not to mention, the best was to take a chunk of edge out of the latest super-steel-wonder-knife is to use it as a screwdriver, the modest little SAK just laughs at screws.

How many times do we read on the forum, “I just paid 100 dollars or more for this knife and the edge is dull, or the lock wont hold, or it rubs the liner” and so-on. I’m not saying that an SAK wont have a problem from time to time, but of the hundreds that have passed though my hands I have never had one out of whack. In fact, I have come to the conclusion that Victorinox quality is so consistent that it borders on BORING.

I laugh when I see somebody say I need a knife for EDC or camping or outdoors, in a folder I prefer liner or axis locks and a tanto point with a monster thick blade, or a fixed blade of 6 to 10”, ¼” thick blade and ability to chop. Now no doubt there are plenty of knives that will do that, but then again so will my SAK and I don’t feel like I am toting around a small car. I generally don’t respond to those threads anymore as it gets tiring trying to defend the little red knife against folks who see it as a joke knife or a disposable knife that is not to be taken seriously.

I think one way to find out if a SAK is worthy of consideration is to try it out directly against a “real knife”. The real knife is a 7” bladed camp knife with an aus-8 blade and is advertised as suitable for camp chores, chopping and such. I selected this knife as it is reasonably compact as far as large fixed blades go, it is from a manufacturer known for quality knives and the edge is one of the thinner edge I have seen on a knife of its type and therefore probably more in-line with a SAK.

The SAK I chose to put up against the “real knife” is a Victorinox Huntsman, a 4 layer SAK that is suitable for pocket carry.

This is not a long term evaluation, nor was it really meant to test edge holding, nor push either knife to the limits of destruction. I tried to just make it a small series of tests that could be done in a day with what I had on hand, and see how a small SAK that is often not taken seriously would compare to a large fixed blade.

The tests consist of cutting down a small tree (as you might do for clearing, or firewood or shelter building), whittling, slicing fruit and slicing cardboard, things like that.

Each knife has been in my collection for a few years and both have been used. Both knives are maintained very well with very sharp edges and each time they are sharpened I maintain as close to the factory edge bevel as possible. Keep in mind I do this mostly for fun, I am not an experienced outdoorsman and my results may be quite different if each knife was used by somebody who does this stuff all the time.

First up was taking down a small tree. It is difficult to declare a clear winner here. The SAK with its saw blade actually took a little longer to go through the tree with. Its main advantage is that it was not uncomfortable, and did not make my arm hurt or tire me out. I could have stayed out and sawed with it all day with minimal discomfort. The “real knife” with its thin edge was faster as with each swing it bit deeply into the wood. The draw back was that its handle is solid, ebony wood with a full tang. The impact was enough to make my hand sore in pretty short order. Also, the knife is not blade heavy, so in order to get a powerful swing I had to scoot my hand back so my pinky was resting on the pommel. The finger grooves in the handle are shallow and fairly ineffective. It did not inspire confidence as far as grip security, it felt as though the knife may go sailing out of my hand, although it didn’t. The advantage to the fixed blade is that even though the first tree may be uncomfortable, a piece of it could be used to baton the knife through any remaining wood you need to chop through. I did this and found the results to be very good. I did not baton the SAK, I really don’t know how well it would handle it, and it’s a small target to hit.

The next step was to shave the bark off the wood and strips that could be used to help get a fire going, or just mindless whittling which I like to do. The SAK shaved long thin strips off like it was nothing at all. The thin edge seemed specially designed for just this task. The “real knife” was no slouch. Its strips were wider, although it required more force and would occasionally try to bite to deep in the wood and bind up. I think this is an issue of control, it’s a large knife and nowhere near as controllable for fine work as the SAK. Either knife will do, but the SAK comes out ahead here. Neither edge was affected.

Next was slicing fruit, apples to be specific. Fortunately my wife buys apples, then nobody eats them so when they started to go bad I had test material J. The SAK will slice through them like air, no difficulty or resistance. If it is a large apple, you may have to slice each side to get it in to halves, but that is no big deal as the slicing is so easy. The large fixed blade was like using a sledge hammer on a nail, not much control with it. Of course the knife would go through, but when the apple reaches the flats of the knife where the hollow grind ends it simply wedges and split’s the apple apart. As for slicing off small bit size pieces, its far easier and safer to do with the SAK. To maintain control with the larger knife requires using the blade as the handle, probably not a good idea. Again, either knife works, the SAK is just better at it.

Next up was slicing cardboard. The SAK is able to do this over and over and over with no problems. It is controllable, slices without much effort and able to make relatively straight cuts, considering that I am kind of a klutz. The larger knife was less efficient. Several times the cardboard would bunch up in front of the edge, not due to dullness or poor quality, just a thicker edge profile, you can force it on through, I just feel that diminishes control somewhat. It is also more difficult to make anything resembling straight slices. 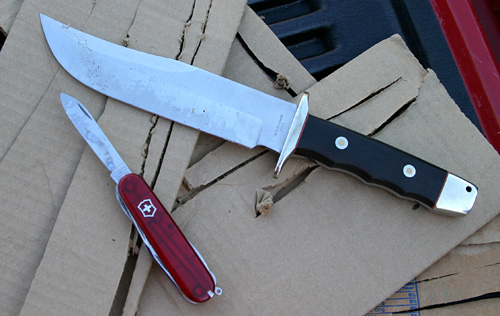 One thing the larger knife will do that I was not comfortable trying with the SAK is splitting wood. Again you can baton the knife through, and when it gets past the hollow grind, like the apple the wood will start splitting, the knife acting as a wedge.

After the tree sap and apple juices, the knives were, to say the least, nasty. Both were cleaned by soaking in a sink of hot soapy water for about 30 minutes, then running them under hot water to rinse them off good. If you are in the field though I would have to say the fixed blade would be far easier to clean.

So, who wins? Me, since I had so much fun doing this. As for the knives, who knows? I honestly think the large knives have their place and the SAK will never replace them, on the flip side, the large knife will never replace the SAK and there is a lot of common ground in their uses. I do think this series of tests shows that the SAK is a formidable knife not easily dismissed as a toy. It shows that when push comes to shove that it will hold its own in many of the tasks that are usually associated with a large bowie/camp style knife. I once read something to the tone that a large knife in a pinch can do anything a small knife can do, but a small knife can never do the job of a big knife. I am guessing that the person who wrote that has no experience with the SAK.