At a recent family gathering, me and some of the other guys got into a conversations about knives. We went through the "what everyone carries" routine and surprisingly, every knife there was either a SAK, or a Stockman pattern slipjoint. As is typical, most of the stockmans were carried by the older guys, most of which are former farmers and serious outdoorsman. And the SAKs were typically carried by the younger guys, with the exception of my Dad who surprisingly carried the SAK I gave him, (and he's managed not to lose) All of the stockmans were carbon steel. Most of them were Case, but there was one Buck in D2 that was very well worn. So, we inevitebly got into the "carbon vs. stainless" debate which ended in me trying to change the subject to the usefulness of the tools.

The whole conversations ended in the SAK guys swearing by their SAKs and the slipjoint swearing by thier tried and true stockmans. So, I decided to do a side by side analysis. Yep, I'm gonna compare apples and oranges just because I can.  I thought it might even be interesting for SOSAK online.  (Indeed, I thought so too!- Def)

So I borrowed a digital camera, put the two basic knives in my pocket (I went with a Tinker and Case Medium Stockman in CV steel) and went about the weekend. Here's how it turned out...

Here's the load for the weekend, the SAK and Case were sharpend on the DMT hone to hair shaving sharp, then left alone. They were carried in the same pocket and I tried to use them equally...

The load for the weekend:

First up was a few kitchen chores. The flat grind on the SAK sliced much better than the hollow grind on the Case. Other stockmans with flat grinds might have faired better, but I don't know.

I have to say, that when cutting up sausage, the stockman did very well because of the clip point. Otherwise, the soft curve of the SAK's blade won the day.

Next up was lunch time the following day. I'll let you guess who won this one...

Up next were a couple of camp chores. This is where the Case really started to shine. The CV blades take a wicked edge, and although don't hold them as long as SAKs, are IMHO, a bit easier to touch up. Not that SAKs are difficult, per se.

The Fatwood test is typical for me to determine how much I'm gonna like a camp knife. As some of you know, Fatwood is sticky, gummy, overall pretty tough. This test was pretty close. The SAK won the splitting test, where I started at the top and split the Fatwood by pressing down on it. But, the Case won the shavings test, proving the sheepsfoot blade has a place in camp.

Both of these knives preformed both chores very well. Either of them will do in camp when a fire is needed. Without a saw on the SAK, this is a close one...

Next test was one of my other favorites. Carve a spoon. This has been somthing I've practiced for a while now. And while none of my spoons will win a beauty pageant, they hold my food up just fine.

The SAK won hands down at the removal of wood from the sides of the cypress. Cypress is a softwood, and very easy to carve. It's also very prevelant in south Louisiana, and my favorite for making camp craft. The SAK proved more than up to the job, and was throwing larger, thicker chunks from the cypress than the Case was.

However, when carving out the bowl of the spoon, it was a close competition. The small blade on the SAK did an excellent job, but the sheepsfoot blade just wouldn't fall behind. The spey blad on the Case was especially useful in carving on the bottom of the bowl.

I'd lean to the Case as the winner of the bowl carving, but the SAK was no slouch. Either would get the job done in the field. The SAK was much more comfortable to use over time, the thicker handle was a blessing on the hands. Perhaps this puts it over the top?

Finally, as far is daily function and use are concerned, the SAK is the hands down winner. The tools on the humble Tinker have helped me to intall electrical switches and outlets, repair ATV's in the field, fix cabinets, open cans, open beer and fix jammed door latches.

This is what makes the SAK so great! It is the most useful knife you can find. The blades cut well, it's comfortable to use, it'll do almost anything any other folder will do, and more! The combination of the simple tools makes this one a winner. The Stockman is a great knife, and it might even find it's way into my pocket, but it'll ride next to a SAK!

They just don't get much more useful in something this size! 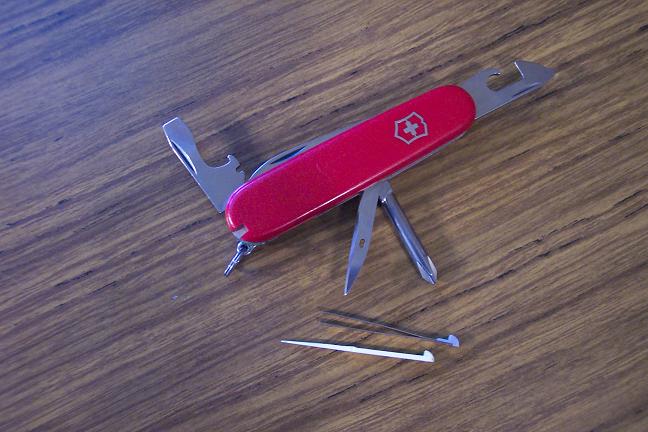